What is a Resistor?

Resistor is defined as A passive electrical component with two terminals that are used for either limiting or regulating the flow of electric current in electrical circuits.

The main purpose of resistor is to reduce the current flow and to lower the voltage in any particular portion of the circuit. It is made of copper wires which is coiled around a ceramic rod and the outer part of the resistor is coated with an insulating paint.

What is the SI Unit of Resistor?

The SI unit of resistor is (Ohm). 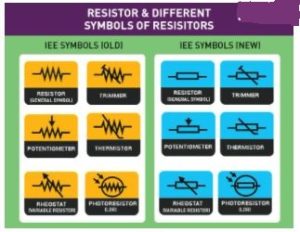 Each resistor has one connection and two terminals. We will look at the three types of symbols that are used to represent the resistor. 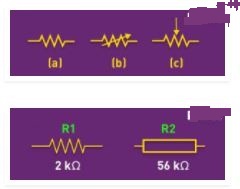 The terminals of the resistor are each of the lines extending from the squiggle (or rectangle). Those are what connect to the rest of the circuit. The resistor circuit symbols are usually enhanced with both a resistance value and a name. The value, displayed in ohms, is obviously critical for both evaluating and actually constructing the circuit.

The principal job of a resistor within an electrical or electronic circuit is to “resist” (hence the name Resistor), regulate or to set the flow of electrons (current) through them by using the type of conductive material from which they are composed. Resistors can also be connected together in various series and parallel combinations to form resistor networks which can act as voltage droppers, voltage dividers or current limiters within a circuit.

Resistors are what are called “Passive Devices”, that is they contain no source of power or amplification but only attenuate or reduce the voltage or current signal passing through them. This attenuation results in electrical energy being lost in the form of heat as the resistor resists the flow of electrons through it.

Most types of resistor are linear devices that produce a voltage drop across themselves when an electrical current flows through them because they obey Ohm’s Law, and different values of resistance produces different values of current or voltage. This can be very useful in Electronic circuits by controlling or reducing either the current flow or voltage produced across them we can produce a voltage-to-current and current-to-voltage converter.

Resistors are available in different shapes and sizes. Common types that are available are through-hole and surface mount. A resistor might be static, standard resistor, special, or a pack of variable resistor. 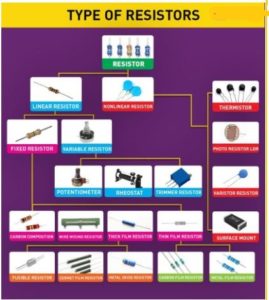 There are two basic types of resistors as follows:

Fixed resistors: These resistors have a specific value and these values cannot be changed. Following are the different types of fixed resistors:

The resistor values change according to the temperature and voltage applied and is not dependent on Ohm’s law. Following are the different types of non-linear resistors:

What is Color Coding of Resistors?

Resistors may not display the value outside but resistor color pattern through their resistance can be calculated. PTH (plated-through-hole) resistors use a color-coding system (which really adds some flair to circuits), and SMD (surface-mount-device)resistors have their own value-marking system.

Following is a table with color code of resistors:

What is Tolerance in Resistors?

Following is a table with tolerance of resistor:

Following are the applications of resistors: