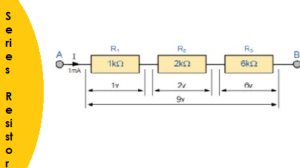 Resistor are to be connected in series when they are daisy chained together in a single line resulting in a common current flowing through them.

A resistor is not only a fundamental electronic component that can be used to convert a voltage to a current or a current to a voltage, but by correctly adjusting its value a different weighting can be placed onto the converted current and/or the voltage allowing it to be used in voltage reference circuits and applications.

Resistors in series or complicated resistor networks can be replaced by one single equivalent resistor, REQ or impedance, ZEQ and no matter what the combination or complexity of the resistor network is, all resistors obey the same basic rules as defined by Ohm’s Law and Kirchhoff’s Circuit Laws.

Then the amount of current that flows through a set of resistors in series will be the same at all points in a series resistor network. For example:

In the following example the resistors R1, R2 and R3 are all connected together in series between points A and B with a common current, I flowing through them.

As the resistors are connected together in series the same current passes through each resistor in the chain and the total resistance, RT of the circuit must be equal to the sum of all the individual resistors added together. That is

and by taking the individual values of the resistors in our simple example above, the total equivalent resistance, REQ is therefore given as:

So we see that we can replace all three individual resistors above with just one single “equivalent” resistor which will have a value of 9kΩ.

Note then that the total or equivalent resistance, RT has the same effect on the circuit as the original combination of resistors as it is the algebraic sum of the individual resistances. 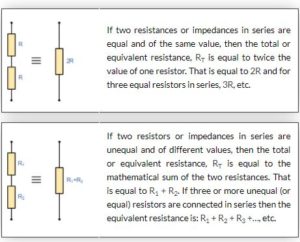 One important point to remember about resistors in series networks to check that your maths is correct. The total resistance ( RT ) of any two or more resistors connected together in series will always be GREATER than the value of the largest resistor in the chain. In our example above  RT = 9kΩ where as the largest value resistor is only 6kΩ.

The voltage across each resistor connected in series follows different rules to that of the series current. We know from the above circuit that the total supply voltage across the resistors is equal to the sum of the potential differences across R1 , R2 and R3 , VAB = VR1 + VR2 + VR3 = 9V.

Using Ohm’s Law, the voltage across the individual resistors can be calculated as:

The equation given for calculating the total voltage in a series circuit which is the sum of all the individual voltages added together is given as:

Then series resistor networks can also be thought of as “voltage dividers” and a series resistor circuit having N resistive components will have N-different voltages across it while maintaining a common current.

By using Ohm’s Law, either the voltage, current or resistance of any series connected circuit can easily be found and resistor of a series circuit can be interchanged without affecting the total resistance, current, or power to each resistor.

Resistors in Series : Example No 1

Using Ohms Law, calculate the equivalent series resistance, the series current, voltage drop and power for each resistor in the following resistors in series circuit. 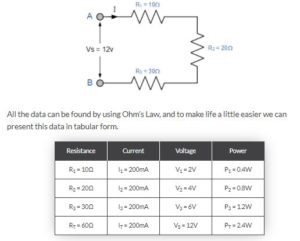 We can see from the above example, that although the supply voltage is given as 12 volts, different voltages, or voltage drops, appear across each resistor within the series network. Connecting resistors in series like this across a single DC supply has one major advantage, different voltages appear across each resistor producing a very handy circuit called a Voltage Divider Network.

The series resistive circuit shown above forms a simple voltage divider network were three voltages 2V, 4V and 6V are produced from a single 12V supply. Kirchhoff’s Voltage Law states that “the supply voltage in a closed circuit is equal to the sum of all the voltage drops (I*R) around the circuit” and this can be used to good effect. 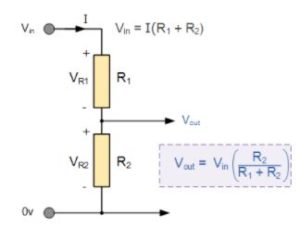 The circuit shown consists of just two resistors, R1 and R2 connected together in series across the supply voltage Vin. One side of the power supply voltage is connected to resistor, R1, and the voltage output, Vout is taken from across resistor R2. The value of this output voltage is given by the corresponding formula.

If more resistors are connected in series to the circuit then different voltages will appear across each resistor in turn with regards to their individual resistance R (Ohms Law I*R) values providing different but smaller voltage points from one single supply. 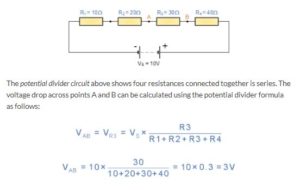 We can also apply the same idea to a group of resistors in the series chain. For example if we wanted to find the voltage drop across both R2 and R3 together we would substitute their values in the top numerator of the formula and in this case the resulting answer would give us 5 volts (2V + 3V).

Now lets suppose that we want to use our two resistor potential divider circuit above to produce a smaller voltage from a larger supply voltage to power an external electronic circuit. Suppose we have a 12V DC supply and our circuit which has an impedance of 50Ω requires only a 6V supply, half the voltage.