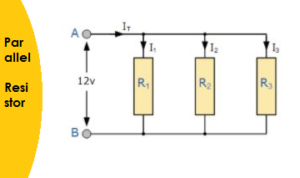 Resistors are said to be connected together in parallel when both of their terminals are respectively connected to each terminal of the other resistor or resistors.

In a parallel resistor network the circuit current can take more than one path as there are multiple paths for the current. Then parallel circuits are classed as current dividers.

Since there are multiple paths for the supply current to flow through, the current may not be the same through all the branches in the parallel network. However, the voltage drop across all of the resistors in a parallel resistive network IS the same. Then, Resistors in Parallel have a Common Voltage across them and this is true for all parallel connected elements.

In the following resistors in parallel circuit the resistors R1, R2 and R3 are all connected together in parallel between the two points A and B as shown. 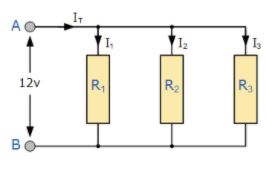 In the previous series resistor network we saw that the total resistance, RT of the circuit was equal to the sum of all the individual resistors added together. For resistors in parallel the equivalent circuit resistance RT is calculated differently.

Here, the reciprocal ( 1/R ) value of the individual resistances are all added together instead of the resistances themselves with the inverse of the algebraic sum giving the equivalent resistance as shown.

Then the inverse of the equivalent resistance of two or more resistors connected in parallel is the algebraic sum of the inverses of the individual resistances.

If the two resistances or impedances in parallel are equal and of the same value, then the total or equivalent resistance, RT is equal to half the value of one resistor. That is equal to R/2 and for three equal resistors in parallel, R/3, etc.

Note that the equivalent resistance is always less than the smallest resistor in the parallel network so the total resistance, RT will always decrease as additional parallel resistors are added.

We now know that resistors that are connected between the same two points are said to be in parallel. But a parallel resistive circuit can take many forms other than the obvious one given above and here are a few examples of how resistors can be connected together in parallel. 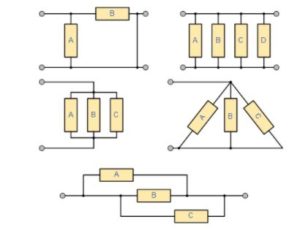 The five resistive networks above may look different to each other, but they are all arranged as Resistors in Parallel and as such the same conditions and equations apply.

Find the total resistance, RT of the following resistors connected in a parallel network. 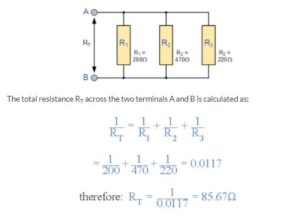 This method of reciprocal calculation can be used for calculating any number of individual resistances connected together within a single parallel network.

If however, there are only two individual resistors in parallel then we can use a much simpler and quicker formula to find the total or equivalent resistance value, RT and help reduce the reciprocal maths a little.

This much quicker product-over-sum method of calculating two resistor in parallel, either having equal or unequal values is given as:

Currents in a Parallel Resistor Circuit

For example, although the parallel combination has the same voltage across it, the resistances could be different therefore the current flowing through each resistor would definitely be different as determined by Ohms Law.

Then by using Ohm’s Law, the current flowing through each resistor of Example No2 above can be calculated as:

thus giving us a total current IT flowing around the circuit as:

and this can also be verified directly using Ohm’s Law as:

The equation given for calculating the total current flowing in a parallel resistor circuit which is the sum of all the individual currents added together is given as:

Calculate the individual branch currents and total current drawn from the power supply for the following set of resistors connected together in a parallel combination. 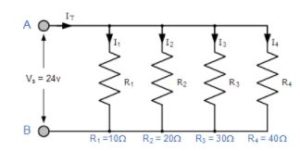 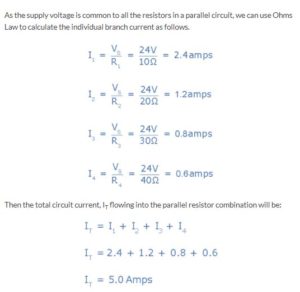 This total circuit current value of 5 amperes can also be found and verified by finding the equivalent circuit resistance, RT of the parallel branch and dividing it into the supply voltage, VS as follows. 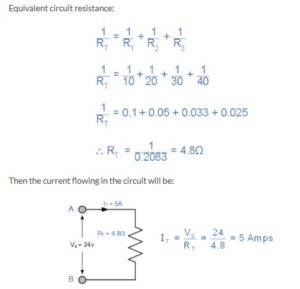 So to summarise. When two or more resistors are connected so that both of their terminals are respectively connected to each terminal of the other resistor or resistors, they are said to be connected together in parallel. The voltage across each resistor within a parallel combination is exactly the same but the currents flowing through them are not the same as this is determined by their resistance value and Ohms Law. Then parallel circuits are current dividers.