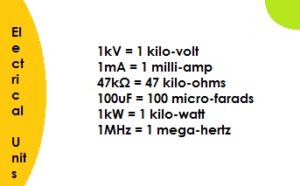 A standard units of electrical measurement used for the expression of

Voltage, current and resistance are the,

These electrical units of measurement are based on the International (metric) System, also known as the SI System with other commonly used electrical units being derived from SI base units.

Sometimes in electrical or electronic circuits and systems it is necessary to use multiples or sub-multiples (fractions) of these standard electrical measuring units when the quantities being measured are very large or very small.

The following table gives a list of some of the standard electrical units of measure used in electrical formulas and component values.

There is a huge range of values encountered in electrical and electronic engineering between a maximum value and a minimum value of a standard electrical unit. For example, resistance can be lower than 0.01Ω or higher than 1,000,000Ω. By using multiples and submultiple’s of the standard unit we can avoid having to write too many zero’s to define the position of the decimal point. The table below gives their names and abbreviations.

So to display the units or multiples of units for either Resistance, Current or Voltage we would use as an example:

To convert from one prefix to another it is necessary to either multiply or divide by the difference between the two values. For example, convert 1MHz into kHz.

Likewise, if we needed to convert kilo-hertz into mega-hertz we would need to divide by one thousand. A much simpler and quicker method would be to move the decimal point either left or right depending upon whether you need to multiply or divide.

As well as the “Standard” electrical units of measure shown above, other units are also used in electrical engineering to denote other values and quantities such as: